In 1929 a group of miniature railway enthusiasts came together to form a model engineering club. Many of them had home workshops, and in their spare time lovingly created miniature locomotives. At that time the club did not have a track of its own and members met from time-to-time at tracks that existed on someone's private property to run their trains. Naturally, these members wanted to share the fruits of their labours with other enthusiasts and the public, and to re-kindle the memories of that bygone era when most people travelled long distances by train.

The search was on for a property of their own, and finally on July 1, 1975 the club opened its doors to the public at the track which was located at the Burnaby Village Museum. Over time we found that the site was not large enough to meet our needs, and there was no room for expansion. Burnaby Parks assisted us in relocating to our present 7-acre site, which had been used as a municipal works yard.

In late 1991 we closed our original track, and after almost two years of back-breaking work we opened at our current location, in Confederation Park, on July 1, 1993. Landscaping of our current site included 8,500 loads of fill from the Cassiar Connector highway project with which we created four hills, adding interest and variety to the ride. 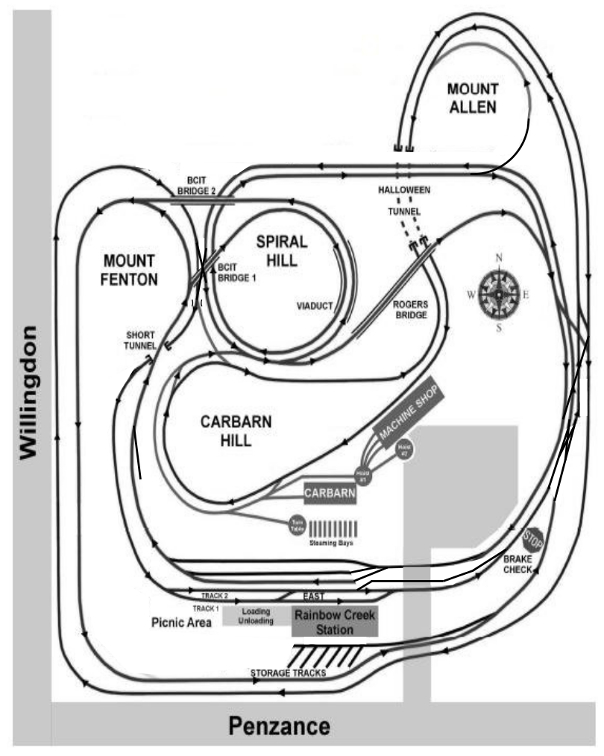 Over the years we've added more track and now there is over 2 miles of main line on which to run our trains. Tunnels, bridges, crossovers and spirals have been added as money, and donations of manpower and material have been made available. The BCR is a work in progress and we are always planning and working on new developments, including signalling systems, a raised track for 1/12 and 1/16 scale models, and many other railway features.